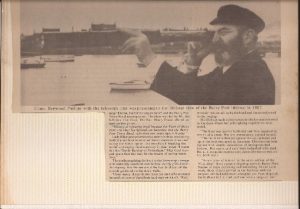 “History is repeating itself because the Vicar of Burry Port will bless the lifeboat on Saturday and the Burry Port Town Band, reformed two years ago, will play”.

Lady Elkington proceeded to name the boat and taking hold of a bottle of wine in her hands she drew it out and swung the bottle against the woodwork breaking the bottle and saying simultaneously in clear tones “I name this the ‘David Barcley of Tottenham’ May God bless and grant that she may be the means of saving lives”.

The cords attaching the boat to the launching carriage were suddenly loosened and the boat swiftly glided down the slipway into the sea amid the hearty cheers of the crowds gathered on the dock walls.

Three hearty cheers broke from the men who manned her and in token of the tribute, held their oars aloft. “Rule Britanie” was struck up by the band and the crowd joined in the singing. The lifeboat made a short cruise in the bay and returned to the dock where her self-righting capabilities were tested.

“The boat was heavily ballasted and then capsizes by means of a crane. But she immediately righted herself”.

“The masts were then put up and the sails unfurled and again the boat was upset by the crane. This time the boat righted with visible indications of having touched the bottom. Her masts and sails were bedaubed with mud. But all these achievements were cheered by the crowds on the dock walls.

“As a matter of interest in the same edition of the “Guardian” there appears shipping new in Burry Port. Names of the ships departing and unloading. In the same week, three vessels arrived in the harbour without cargoes, one had a shipment of copper ore. Four ships left the harbour full of coal and one with a cargo of tin.