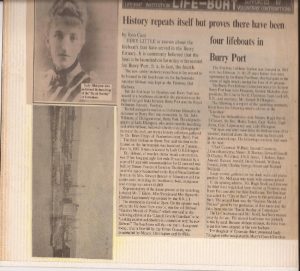 Very little is known about the lifeboat’s that have served in the Burry Estuary. It is commonly believed that the boat to be launched on Saturday is the second for Burry Port. It is, in fact, it’s the fourth.

The new rubber inshore rescue boat is the second to be housed in the boathouse on the harbour side.

Another lifeboat was kept at the Pembury Old Harbour.

But the first boat for Pembury and Burry Port was housed in a boathouse situated in the plantation in the edge of the golf links between Burry Port and the Royal Ordnance Factory, Pembrey.

The following information on the former lifeboat to be stationed at Burry Port was researched by Mr John Williams, of Elkington Road, Burry Port. The old photographs of Lady Elkington, who performed the launching of the lifeboat, believed to be the only photographic record of the craft, are from a history collection gathered by Mr Brian Cripps of Pemberton Avenue, Burry Port.

The third lifeboat in Burry Port and the first to be housed on the harbour side was launched on Tuesday, June 16, 1887. It was christened by Lady G.B. Elkington.

The lifeboat, of wooden clatter board construction, was 37 feet long and 8 feet wide. It was manned by a crew of 15 men with accommodation for 12 oars and was built by Messrs, Forrest of London. The lifeboat was the fruit of a legacy bequeathed to the Royal Naval Lifeboat Institute by Mrs Stewart Barcley of Edmonton and the entire costs, including the boathouse, boat, equipment and the storage was about £1,000.

Representatives of the donor present at the launching included Mr. T. Kilsby, Miss Stantin and Miss Epworth. Captain Laprimandy represented by the R.N.L.I.

The ceremonies started at 2pm. On the opposite wall, where the Harbour View now is, was the old lifeboat “Stanton Merick of Pimlico” which was said in the following edition of the “Llanelli County Guardian” to be “looking ancient and obsolete in comparison with the new lifeboat”. The boathouse still the one that is being used today, after a face-lift by the Urban Council, was constructed by Messrs. Christopher and Griffiths.

The Pembrey Lifeboat Station was founded in 1863 with two lifeboats. In the 25 years before they were superseded by the Burry Port boats, they had gone to the rescue of eight wrecks saving the lives of 34 persons.

The following is a report of the launching ceremony lifted from the following week’s edition of the “Guardian”.

At 3pm and after some delay the lifeboat crew, 15 in number, marched down the road, wearing their cork jackets and red caps. The following crew took their seats in the boat.

Large crowds gathered on the dock walls and photographer Mr McLucas was ready with camera poised.

The first boathouse said Mr Nevill, had been washed away by the sea. The second was partially buried by sand. Because of these mishaps, the third boathouse has been situated at the new harbour.

The daughter of Coxswain Blair, presented Lady Elkington with a bouquet at St Mary’s Church. The Choir sang “Eternal Father Strong to save” and the Burry Port Town Band accompanied. The choir was led by Mr Jas S Bevan. The Vicar, The Rev. Henry Evans offered an appropriate prayer.